Câmara de Lobos is a pretty fishing town that is located on the south-eastern side of Madeira and makes for a pleasant day trip from Funchal. Câmara de Lobos is a working town specialising in the fishing of the night dwelling Scabbard fish. This hard fishing lifestyle is reflected in the town, with small traditional tenements that house multiple families crowding around the cliffs, while at dawn the returning fishermen head to the bars to drink Poncho, a strong alcoholic drink. 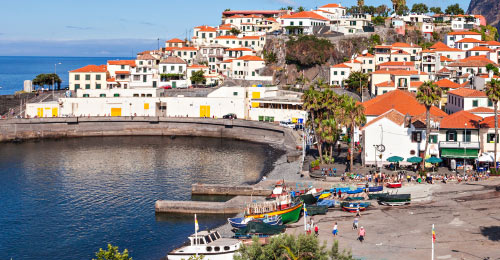 The fishing boats on the beach of Camara de Lobos

For visitors Camara de Lobos is a picturesque location with colourful fishing boats pulled up onto the grey beaches, which are over looked by some of the highest cliffs in Europe. These charming views inspired Camara de Lobos’ most famous resident, Winston Churchill, to paint his celebrated pictures of the region and this history is lovely embraced by the town.

What to Do in Camara de Lobos?

Camara de Lobos is a relatively small town and all of the major sights can be seen in a couple of hours, a trip can be extended by visiting the cliffs of Cabo Girao. Highlights of Camara de Lobos include:

Visit the grey stone pebble beach at the heart of the town where the bright fishing boats are rested during the day. These colourful boats stand at stark contrast to the grey stones of the beach and provide for wonderful photo opportunities.

Explore the simplistic fisherman’s chapel dedicated to Saint Anthony. This chapel was historically where the wives of fishermen would come and pray for their husbands while they were out on the dangerous waters. The interior is decorated with the life of Saint Anthony and his exploits while at sea.

Paintings in the fishermen’s chapel

Experience vertigo, while stepping out over the 500m drop of the Cabo Girao cliffs on the glass bottomed skywalk. These cliffs are the highest on Madeira and have been converted into the island’s most popular tourist activity. It is only for the brave to look down at the terraced fields and vineyards far below. To further extend the nauseating visit, ride the cliff face cable car to the base of the cliffs.

Drink a glass of the traditional poncho alcoholic beverage in one of Câmara de Lobos’ numerous bars. Poncho is a strong alcoholic drink based on lemon, honey, sugar and a generous dash of Aguardiente (a sugar cane spirit). 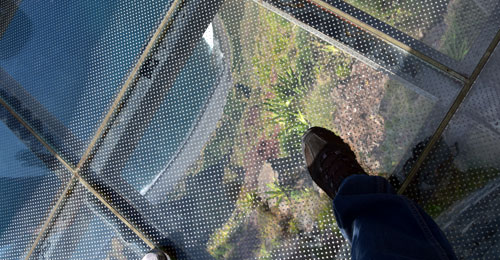 The massive drop from the Cabo Girao cliffs

The fishing boats of Câmara de Lobos are moored during the day, as the Scabbard fish comes to the surface (around 100m depth) at night to feed. During the day, the fishes descend to depths of 1,500m, and this deep water survival has evolved the ugly appearance of the fish, with big eyes, a long snout and fang teeth.

Câmara de Lobos is only 5km to the west of Funchal and is served by a regular bus service. All Rodoeste buses departing from Funchal and heading in a western direction pass through Câmara de Lobos. Due to the short distance it may be easier to catch a taxi, but you should always agree a price before stepping into the car.