The cliffs of Cabo Girao are some of the highest in Europe, with a near vertical drop of over 500 meters down to the raging seas of the Atlantic Ocean at the base of the cliffs. These magnificent cliffs have been converted into a nauseating tourist attraction, with a glass floor skywalk extending out over the top of the cliff. 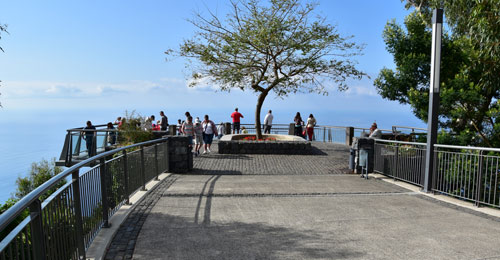 This glass skywalk is only for the brave, but from the top of the cliffs there are amazing views along the coast and down to the town of Camara de Lobos. For visitors with time (and not just on a rushed coach tour) ride the cable car down the face of the cliff to terrace fields filled at the base of the cliffs. The Cabo Girao Cliffs and skywalk are a highly-recommended tourist attraction of Madeira, and best of all it is absolutely free.

There is no admission fee to visit the Cabo Girao skywalk and the attraction is always open. During the high season, it can get very busy, as it is one of the first stops by the coach tours following the western route. The skywalk is perfectly safe but the glass bottom floor will induce minor vertigo in most sane people. At the Cabo Girao cliffs there is a tourist souvenir shop, a café and toilets. 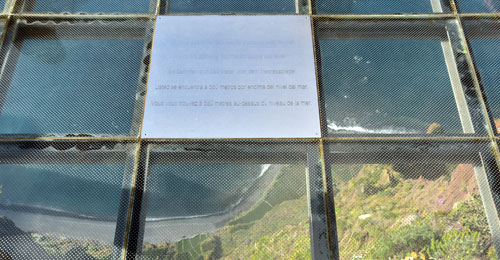 Travel to the Cabo Girao Cliffs

The Cabo Girao is only 2.7km (as the crow flies) from Camara de Lobos but the winding route up the steep hills is 6km and takes around 15minutes. At the top of the cliffs there is a large free car park. 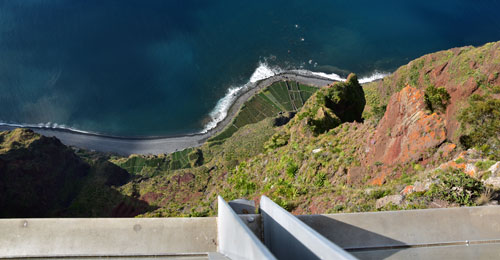 The massive drop from the Cabo Girao cliffs

For those without a rental car the cliffs can be reached using bus from Funchal or Câmara de Lobos. The most useful route is the number 7 from Funchal to Ribeira Brava which stops in Câmara de Lobos and Cabo Girao. This service leaves Funchal at 9:30, gets to Cabo Girao at 10:20 and there is a return bus at 11:25. A single ticket costs € 2,75 and the exact timetable can be found on the Rodoeste website:
http://www.rodoeste.com.pt/Portals/0/PDF/Panfleto.pdf
A full list of services around Câmara de Lobos can be found on their page:
http://www.rodoeste.com.pt

The glass floor of the skywalk, only for the brave!

What else to do at the Cabo Girao Cliffs?

To extend a visit to the Cabo Girao Cliffs take the cable car down to the Fajas de Cabo Girao terraced fields. The return cable car ride is €5.00 and the route scales down the cliff face. The reason that this inaccessible land has been cultivated for vines is that the south facing cliffs shelter the terraces and radiate the summer heat for the almost perfect growing weather. Previous to the construction of the cable car farmers could only access the field by boat.

The cliffs were once part of an ancient volcano and the steep drop of the cliffs continue into the sea south of Cabo Girao. These waters are so deep that it sometimes is possible spot whales feeding in the nutrient rich sea.