Praça do Giraldo is the main square of Evora and it is hard to believe that this calm and pleasant setting was the scene for some of the region’s most violent historical events. The square was the focal point for the murderous 16th century Spanish Inquisitions and more significantly the location of the execution of the Duke of Braganza in 1484. Today the charming Praça do Giraldo is a popular place for tourists to sit at the open air cafes and restaurants and embrace the relaxing ambience.

The Praça do Giraldo is the heart of the city

What's to see in the Praça do Giraldo?

The Praça do Giraldo is the largest square in Evora and has historically been the heart of the city. Originally in the square was devised in the 13th century as a public area outside of the city walls that could host the weekly market. As Evora expand the city walls incorporated the Praça do Giraldo and the square was flanked by the mighty 14th century Estaus Palace. As the palace fell out of favour with the Portuguese nobility in the 16th century it was abandoned and become absorbed into other buildings of the district.

A section of this once grand palace is still visible in the Praça do Giraldo and today houses the tourist information office. The gothic architectural legacy of the palace has continued to this day with wide stone arches and traditional white painted facades. At the eastern edge of the Praça do Giraldo is the squat Igreja de Santo Anta church, while the bank at the western end was once the town hall and later the city jail. In the centre of the square is the ornate Henriquina fountain the source of water from the Água de Prata Aqueduct.

Historical Events of Praça do Giraldo

The most historic significant event that occurred in the Praça do Giraldo was the beheading of the Duke of Braganza in 1484 by his brother-in-law, King John II. King John II murdered his brother-in-law as the duke was in league with the Spanish nobility to overthrow the Portuguese king. The Duke of Braganza’s plans were uncovered after his letters were intercepted by the king’s spies and the Duke was executed in the Praça do Giraldo as a clear warning to other conspirators. 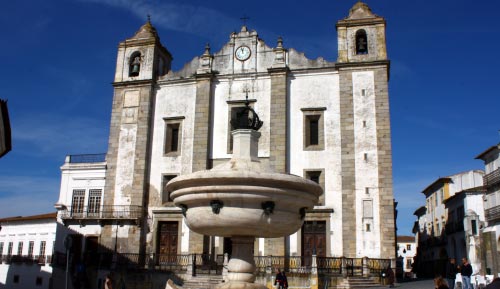 The Praça do Giraldo is named after a folklore hero, Giraldo Sem Pavor, who aided Alfonso Henriques expel the Moors from the Alentejo region during the Christian Crusades of Portugal. Giraldo Sem Pavor (Gerald the Fearless) and his band of fighters were famed for their stealth and surprise attacks.

The gothic architecture of the Praça do Giraldo

His association with Evora occurred in 1170 when his band of fighters significantly weakened the Moorish defences of Evora and allowed Alfonso to claim a relatively easy victory. Evora further honours this folklore hero by placing an image of Giraldo Sem Pavor on the city’s coat of arms. The quiet disturbing emblem of Evora is of Giraldo riding a horse while severing the heads of a Moor (the man) and a Moorish agent (the women) with his blood stain sword.

The best guide to Evora