Evora is one of the finest tourist destinations of central Portugal. It is a delightful city that exudes Portuguese charm and boasts a vast array of fascinating tourist attractions.

Evora was a major trading and religious centre, and this former importance is reflected in the sheer number of historical monuments, all of which are all conveniently situated within the city’s ancient walls.

Evora should not be mistaken for a sleepy old relic that is reliant upon its glorious past; the city is young and vibrant, with a large student population who attend one of the world’s oldest universities. 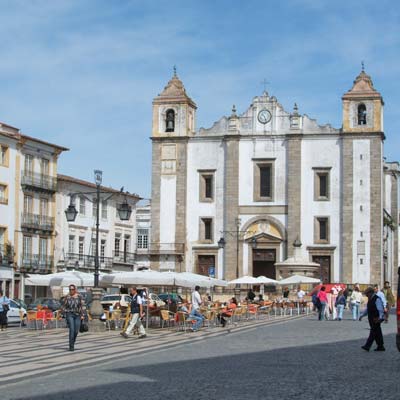 The Praça do Giraldo is the heart of Evora

Evora is surrounded by the Alentejo, a region of sun-baked olive groves, fortified towns and traditional villages, all of which are a joy to explore from Evora. Evora and the Alentejo offer a truly unique Portuguese experience, with a distinctive heritage, delicious regional cuisines and an infectious unhurried pace of life, a consequence of the sweltering hot summer months.

Evora may not be as famous or instantly recognisable as other larger Portuguese cities, but it should be high on your list of places to visit while in Portugal. 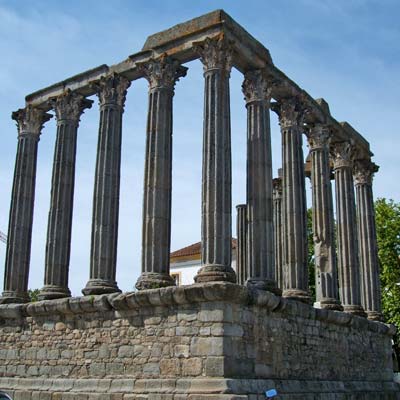 The best-preserved Roman Temple on the Iberian Peninsula 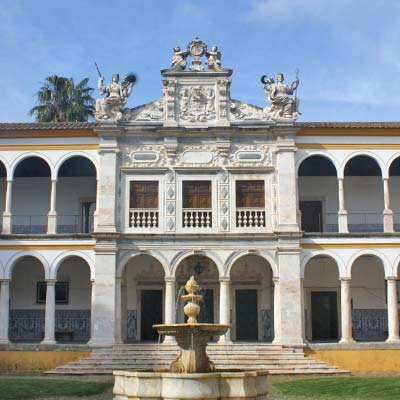 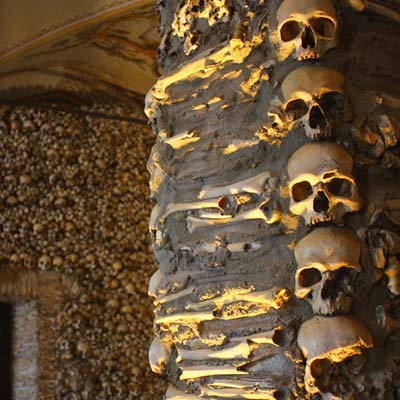 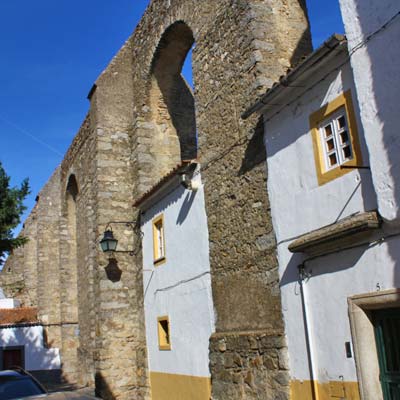 Evora as a day trip

Evora can be visited as a day trip from Lisbon. This will be a very long day trip and will involve a lot of travelling, especially if reliant on public transport.

Once in Evora, all of the major tourist attractions can be seen within about 4-5 hours of sightseeing

Warning: During the summer, Evora is significantly hotter than Lisbon, and the intense sun makes sightseeing very draining from 11-3pm. 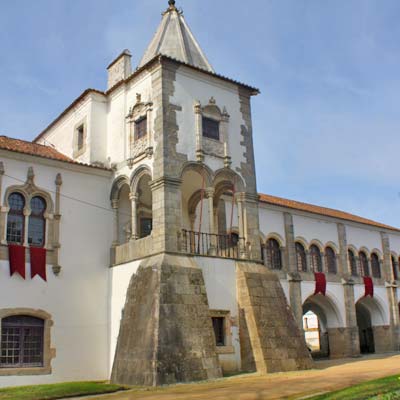 The Palácio de Dom Manuel, was the Royal Palace in Evora but today only the single wing of the palace remains

A typical 1-day tour of Evora is shown in the interactive map below. The green route is the classic tour of the historic centre, which includes the cathedral, the Roman Temple, the university and the Bone Chapel. The yellow route is an additional tour of the north of the city, which follows the aqueduct. The two grey lines are the routes to and from the train and bus stations. 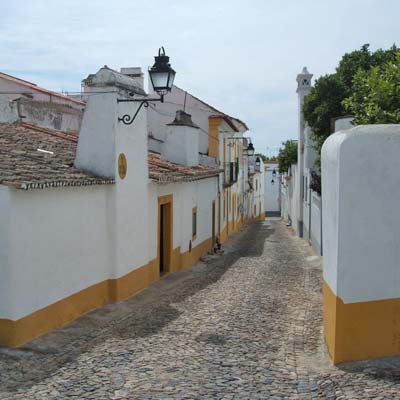 The pretty cobble backstreets in Evora 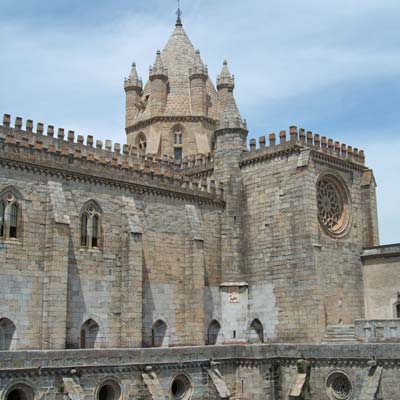 A less demanding method to see Evora in a single day is to join one of the organised tours that depart from Lisbon. These tours are designed for modern tourists and have the added benefit of local and knowledgeable guides.
We have worked with Getyourguide.com over the previous 6 years, and a selection of their best tours of Evora includes:

Evora for a longer stay or holiday

If you have the time, Evora is the ideal place to slow travel and experience authentic Portugal. The surround region is also popular for rural tourism, yoga retreats or to unwind from stressful lives.

Spending at least one night in Evora allows for a more relaxed method to discover the city, and is highly recommended in the hot summer months. A third day could visit the pre-historic standing stones of Cromeleque dos Almendres and the majestic castle at Evoramonte.

Advice: To get the most of the Alentejo region a rental car is needed as there is limited public transport. 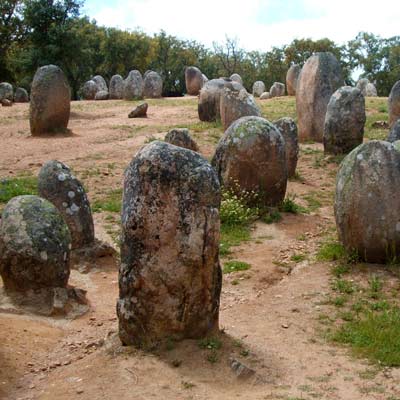 The Cromeleque dos Almendres date from 6000 to 4000bc, and certain stones have ancient circular engravings

Further days could explore the Alentejo region, with day trips to the marble towns of Estremoz, Vila Viçosa and Borba, and the fortified town of Elvas. Elvas has unique star-shaped defences and forts, which were constructed from centuries of border fighting against Spain, and is a fascinating tourist destination.
Related articles: Elvas Guide

Fascinating fact: The town of Olivença (in Spain) is at the centre of one of Europe’s oldest border disputes. In 1815 the region should have been returned to Portugal under the Congress of Vienna, but Spain refused and has remained Spanish ever since.

For an even longer stay, Evora has the added benefit of providing great value for accommodation and food, with prices significantly cheaper than Lisbon or the Algarve. To understand how inexpensive living in Portugal could be, look at the prices of houses for sale in the rural regions of the Alentejo. 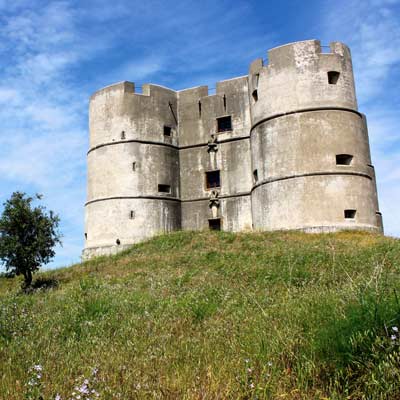 The map below shows the location of hotels and rental rooms in Evora, and by altering the date to your holiday, the map will display current prices:

Travel from Lisbon to Evora

Evora is connected to Lisbon by regular and inexpensive rail and bus services. There are more daily bus departures than the train, but the railway provides a more relaxing journey.

Travel times for both bus and train are around 1.5 hours, and the fares are comparable at €12.50 for a single adult ticket. The frequency of the public transport means that Evora can be visited as a day trip Lisbon.
Related articles: Lisbon to Evora 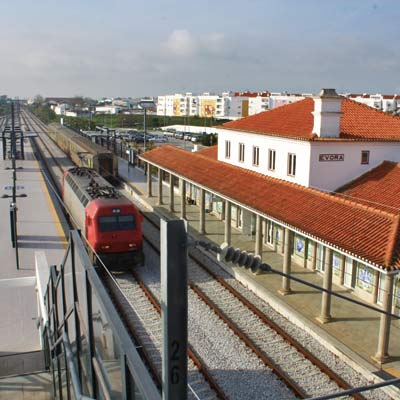 Evora train station is modern but very quiet, with only a handful of departures per day

There are three historical monuments that could be considered as the main tourist attractions of Evora; they are the Sé Cathedral, the Roman Templo de Diana and the Aqueduto de Água de Prata. Most visitors to Evora will also want to see the Bone Chapel…..

The Sé cathedral
The Sé cathedral is a beautiful example of Gothic architecture.
The cathedral has two mismatched towers, and this is unique for gothic religious buildings, which usually have a panel of symmetry across the front portal.

A visit to the cathedral allows access to the roof, from which there are wonderful views over Evora. 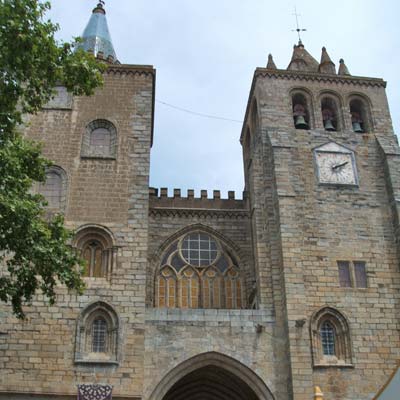 The cathedral with its two very different towers

The Templo de Diana
The Templo de Diana is the best-preserved Roman temple on the Iberian Peninsula. The temple is named after the Roman goddess Diana but when it was constructed in the 1st century, it was actually dedicated to Augustus – the emperor who created a cult about himself.

The temple has been so well preserved, as during the medieval era it was incorporated into the palace that stood here. Later, after the destruction of the palace, the temple was used as an abattoir and even a wood store! 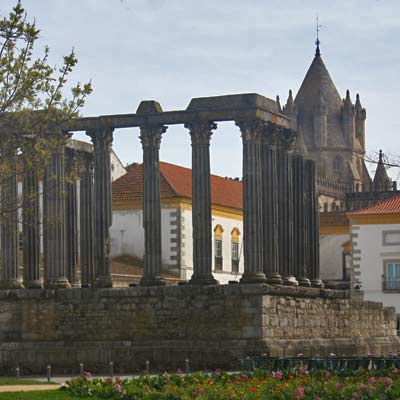 The Templo de Diana with the cathedral to the rear

The highest arches are seen outside of the city walls, while inside the city, houses and shops have been constructed beneath the arches.

Historic intrigue: The name of the aqueduct (the Silver Water Aqueduct) has a double meaning. The first, and more obvious, is the silver appearance of the water under the bright summer sun. The second reflects the astronomical construction costs, which were so high that it nearly bankrupted the regional government. 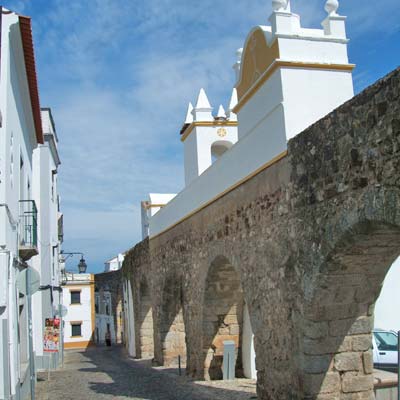 The aqueduct close to the city centre 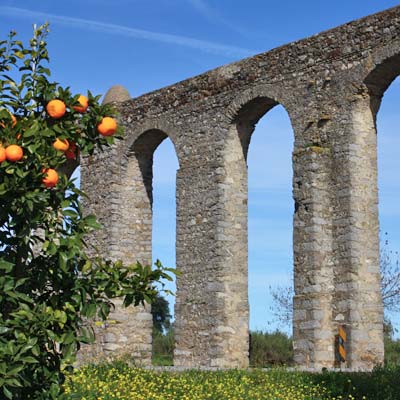 Raises to giant arches outside of the city walls

The Capela dos Ossos (Bone Chapel)
There is no stranger tourist attraction in Evora (and possibly central Portugal) than the macabre Capela dos Ossos. The walls of this small chapel are lined with the bones and skulls of more than 5,000 bodies that were exhumed from the crowded graveyards of Evora.

These bones have not just been stored in the walls but actually create the decoration of the chapel. The Franciscan monks who designed the chapel followed the Counter-Reformation belief, that death is purely a transitory stage.
The creepiness is compounded by the wording above the entrance, which reads "We the bones wait for yours". 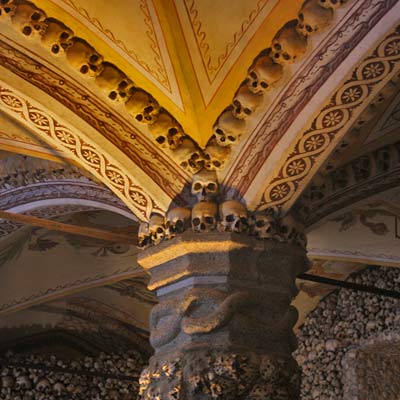 Thousands of bones line the walls

When best to Visit Evora?

Evora has incredibly hot summers, warm springs and autumns. Winters are mild but there is always the chance of wet days.
Early spring is the best season to visit Evora, when the rolling plains are lush and full of flowers and the days are bright and pleasant. 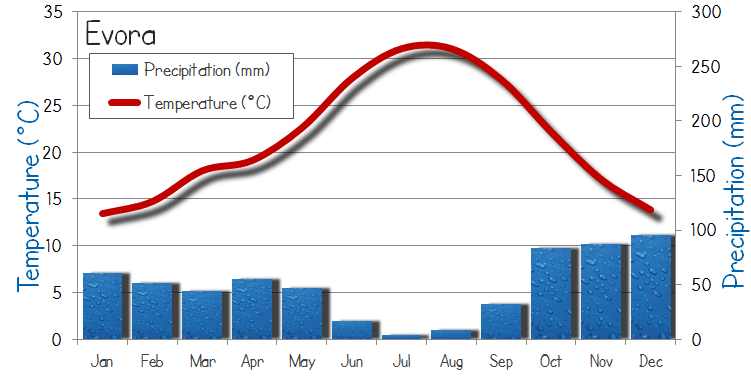 The average weather of Evora

Summers are extremely hot in the Alentejo region and sightseeing can only be done in the early morning or late in the afternoon. For tourists intending on visiting during the summer, follow the locals’ example, by operating at a much slower pace and taking a long lunch. All municipal tourist attractions close for an extended two-hour lunch, irrespective of the season, so plan your day of sightseeing around this long break.

The best guide to Evora

We are the original, independent, travel website for Portugal.

We want to help you, as the modern and social aware tourist, to discover authentic and memorable experiences, in a country we adore. 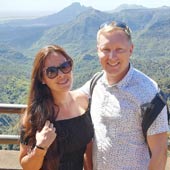 We are no multi-national corporation; we use first-hand knowledge, and write these guides because it is our passion.

The original concept was to create clear, concise and informative guides - which we would actually want to use!

After 12 years of traveling, 20 different websites and 30million visitors, this is still our true belief.

If you want to see what we’re up to or get in contact with us, pop over to our Instagram page…

We hope that you enjoy your holiday to Portugal,
Phil & Carla Giddioso